Randy & Sara has been raving about this place for some time now. Since we’ve not met up since the last outing at Reunion Bangsar, a weekend lunch was arranged. We left home early in order to avoid the lunch crowd as seemingly, this place is often crowded, always packed and you really have to be there early, else risk missing out on the good stuffs, or waiting relentlessly for a seat as this place can accommodate at most, 12 or so tables of patrons.

Tucked hidden somewhere in Sungai Way, this is an eatery with almost zero media fanfare, publicity, nor even barely noticed from the main roads. The most prominent landmark had to be the Sri Sakthi Easwari Alayam temple which is across the road. Location details to come at the end of the post, predictably. 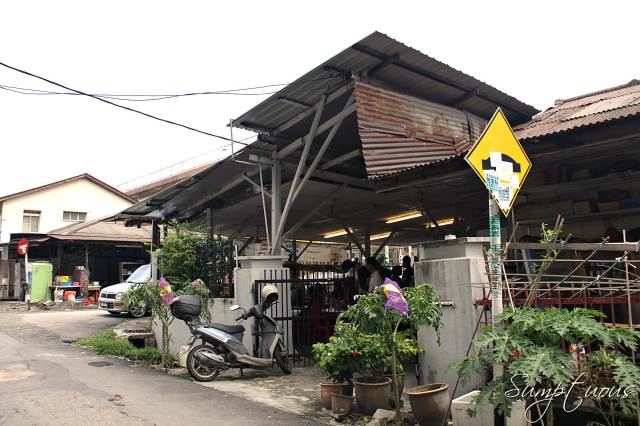 From the outside, this appeared to be nothing more than a shack; until you walk in and witness for yourself the sea of people eating away while those who are in the queue for a table stands next to you, pressuring and breathing down your neck, telling you to quickly finish up and get lost!

A bare all kitchen where all can see how their flavorful dishes are prepared..

King Vege/帝王苗 @ RM 8.80 (S/小) ~ I like the name but not the taste. There’s nothing special to this green except only the “distinctive” name. In fact, it tasted bitter. I’ll avoid this the next time.

Claypot Tofu/瓦煲豆腐 @ RM 9.80 (S/小) ~ Tofu cooked claypot style with a variety of vegetables and seafood should spell aromatic, but, this deal seriously lacked flavor. It was very ordinary and forgettable.

Happy Kampung Chicken/走地甘榜鸡 @ RM 22.80 (S/小) ~ The village chicken was chewy with heavier taste of chicken poached to a marvelous extent; retaining the natural juiciness of the flesh with a toothsome bite.

Minced ginger in shallot oil accompanied by a plate of bright orange chilli sauce offer a multitude of dunking possibilities.

Steamed Grouper with Minced Ginger/姜茸石斑@ RM 24.80 (S/小) ~  If you’re not fond of bones in your fish like me, settle for this awesome steamed  grouper filleted version instead. Drenched in basic soy sauce, sesame and garlic oil combination, the fillets were extremely flaky, sweet and is steamed to retain its precious flavor.  The additional fried minced garlic, chopped fresh coriander and julienned ginger provide an extra zing to the dish.

Fried Kangkong with Shrimp Sauce/虾酱雍菜 @ RM 12.80 (S/小) ~ Again some greens to balance the meal. Served in clay pot, It’s crunchy and very flavorful, with the shrimp sauce not being overly empowering, just nicely done. We were glad to have made this choice.

Long Bean Roasted Pork/豆角烧肉@ RM 9.80 (S/小) ~ The beans were tasty while retained its crunch, but the roast pork were a let down. Not only it did not stand out, it lacked flavor, dry and tough.

Char Siew/拖地叉烧 (L/大) @ RM 25.00 ~ Nicely caramelized, smoky aroma charred crust with a good proportion of lean and fat layer. The meat beneath the greasy exterior melts in your mouth tenderly without much biting or chewing needed. Certainly did not disappoint but, it didn’t knock me off my socks either. I still prefer Brother Kuan’s!

Chef taking a break after the lunch crowd dispersed; around 1425..

As we were leaving, the lunch crowd started to swell again.. this was taken at 1450.. unbelievable!

The meal came to only RM 128.70 for 5a/2c inclusive of rice and drinks. The dishes could easily have fed 8 adults without much problem, for we were struggling to polish up the plates towards the end of our meal.

Besides the mentioned items, they also have fresh from the oven roast pork which is only available on Friday nights. Other notable specialty including the curry fish which I’ll be back for.

So, if you plan on dropping by, it’s best to come early as they don’t entertain advance reservations.