Bandar Seri Petaling (大城堡) is famous for being a haven of food and as like any other neighbourhood, finding a parking space is a nightmare but that does not deter many from coming to this residential for good and reasonably priced food and I’m one of them. As I was driving along this row of shophouses, I noticed a striking red banner that bore “Siew Ming steamed fish head” on it and decided to give it a shot. Upon stepping in only I realized that the chef is formerly from Ye Look restaurant (蒸肉碎豆腐), a popular eatery amongst the locals so I reckon I made a safe bet.

Steamed egg (蒸水蛋) @ RM 5.00 ~ Smooth and dainty. The preparation here is somewhat different from those we normally had with the exclusion of soy sauce and oil  “flooding” the egg as they are pre-seasoned. Egg’y and nice!

Sweet & sour pork (咕嚕肉) @ RM 8.00 ~ Amazingly crunchy with a sticky and zesty concoction of sauce but without much meat, so, if you’re seeking for a meatier version, this will be a disappointment! 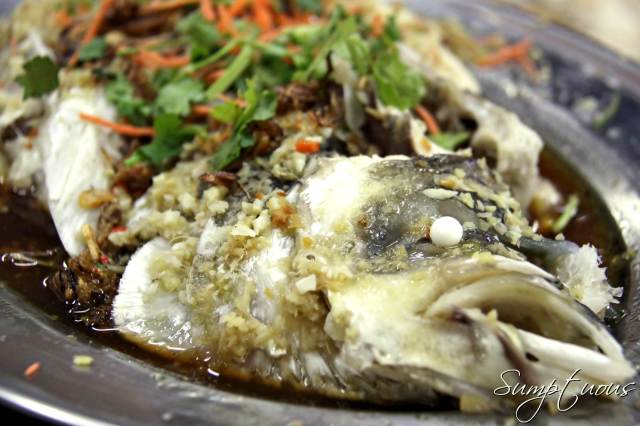 Steamed Song fish head  (清蒸松鱼头)@ RM 23.00 ~ Steamed fish head is what the banner is promoting and we were expecting some really good stuffs to be served. It did not take long for our respectable Song fish head to arrive and set on a mini gas stove, something unusual but different from others coz I only found them in steamboat outlets. The flesh while super sweet and chunky comes smothered in fermented black bean sauce and the lards adds a good flavor to the dish. Spicy and slightly salty, the sauce complements the light, sweet fish very nicely. 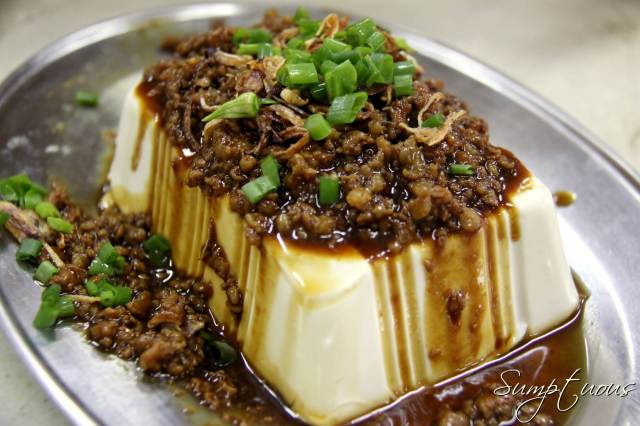 Steamed bean curd (蒸肉碎豆腐) @ RM 6.00 ~ Drenched in oyster sauce with a dash of soy sauce and pepper, sprinkled with generous drizzles of onion, flavorful minced meat, scallion and dried shrimps, this block of goodness is soft, silky and certainly a joy to devour. 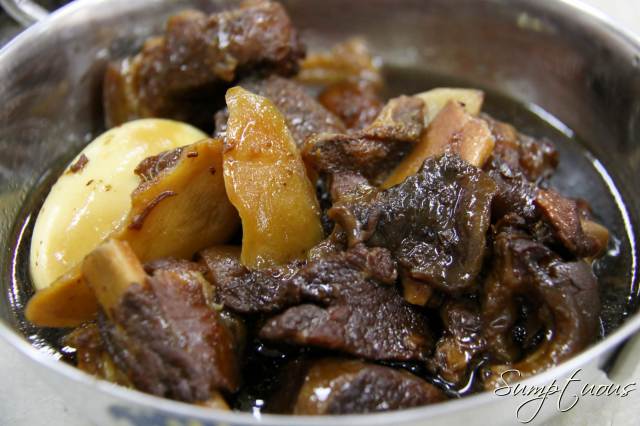 Vinegar pork trotter (招牌猪脚酸) @ RM 10.00 ~ The vinegar pig trotter gave a good texture, not tough  but suffered from a  very, very  strong “porky” smell which seriously put me off! Even the gravy was effected by that odor! Pity! 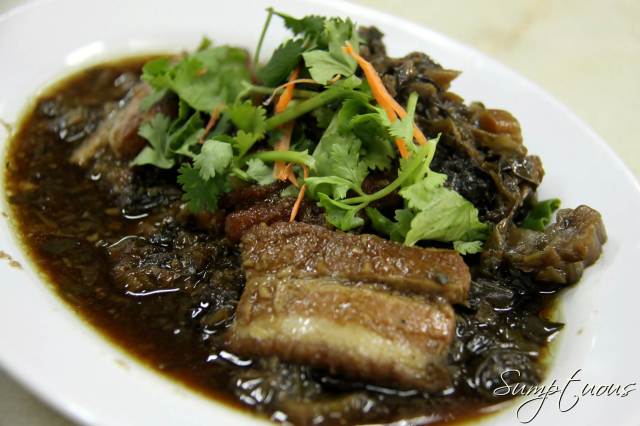 Preserved vegetables with pork belly (梅菜扣肉) @ RM 8.00 ~ One of the staple food of the Hakkas, this dish served here was commendable with soft and tender braised pork belly, not overwhelmingly fat and greasy. The meat was literally melt-in-mouth texture, and the mooi choy had a nice balance flavours of salty and sweet.

Blanched bok choy (小白菜) @ RM 6.00 ~ Compulsory, and guilt-free. I can’t sing praises for such a simple dish served with some fragrant fried onions and a well concocted gravy. The greens served its purpose perfectly, crunchy, not limp and wilted.

Bill came to RM 91.00 for the above including 10 white rice (RM 15.00) and a pot of hot water (RM 4.00). (We brought along our own tea leaves). Overall a little pricey as the serving is very small, good for a person or most to most an adult and a child, nothing more, except for the fish dish. Waiting time is minimal based on the fact that there’s only 1 chef mending the woks, which is commendable. Hope they’ll come to realize and do some amendments on the portion of the food served, otherwise it’s rather tough to sustain in this area where choices of good and affordable food are in abundance.